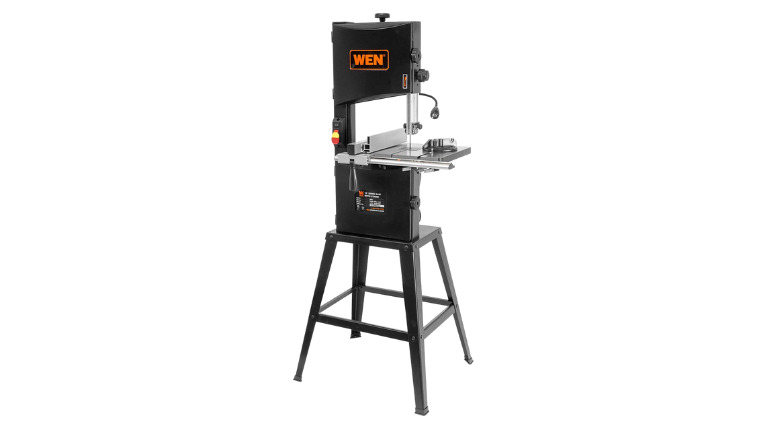 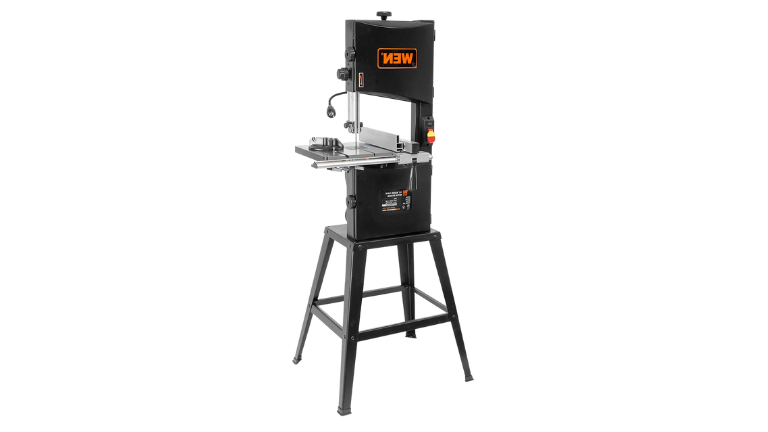 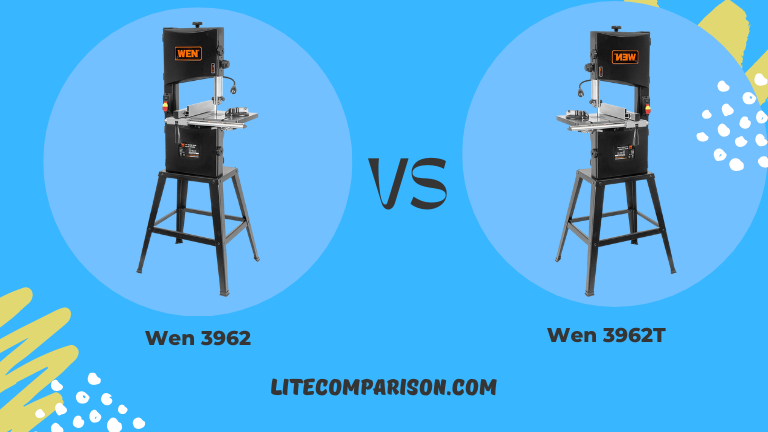 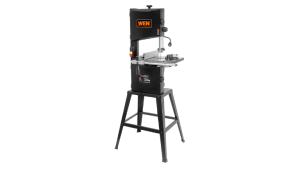 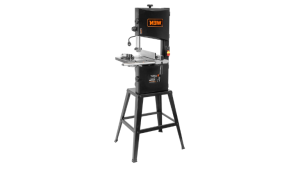 Is it easier to modify the 2021 version?

If you want to cut straight and don't want to use a tablesaw as frequently, ALL bandsaws require LOTS of adjusting. One of the quickest adjustments was kind of silly: I switched to the FASTEST speed instead of the slow speed if you're pushing the wood through and it's being forced to the right (after the blade) and you're getting a diagonal cut. The slow speed is for NON-ferrous metals, which isn't a great idea on this kind of bandsaw in the first place. The rapid speed is for wood, which is what this is for. The rubber area on the wheels doesn't look big enough to center to the gullet, but I tried to split the difference. My blade is centered, but more the full blade than the gullet. The knob on the rear of the machine that controls the axle of the top wheel is adjusted when the machine is turned OFF and the back retaining HUGE wingnut thing has been loosened: As you tighten or loosen the knob, spin the wheel BY HAND to see how the top wheel tilts up or down and how the blade tracks more toward the back or front edge of the rubber component of the wheel. I tried to center the to the gullets, but something was rubbing and making an odd noise, and the blade seemed to be too far back (though maybe it was fine), so I moved it a little forward. Who knows, but the handbook says to center the BLADE and ignore the gullets. Then, remove the little belt from the pulleys and arrange them in the fastest position after loosening the one bolt holding the motor (biggest motor pulley & smallest machine pulley). The cutting ability immediately improved MAJORLY as a result of this. I thought, "Duh! Why did it start out so slowly? My attempts to cut a pencil line on the wood resulted in deviations of more than 45 degrees, but now I am almost obtaining a straight cut. I did this because I wanted it even more: Turn the table really hard in the direction of clockwise rotation while retightening the four (10mm) bolts. Adjust the machine so that the guiding bearings don't spin while it's operating (while NOT cutting anything). They can rotate while cutting; it's fine. In accordance with the owner's handbook, tighten your blade so that you can only push it about 1/10 of an inch while the safety guide is fully extended. After doing this, I went from literally cutting at a 45 degree angle away from my pencil line on the board (which was terrible) to approximately 2 to 5 degrees off right at the conclusion of a longer cut in a matter of minutes. Simple actions led to an almost straight line for me. JUST DOING THIS caused me to think, "Man, that's by far the straightest cut I've ever done on this saw by a wide margin—from 45 degrees off to barely a few degrees off!!!" My previous academic issues I'm rather confident that the issue can be resolved with a new blade: yours should have three teeth in contact with the material at once, whereas mine only has one (the way huge teeth on very thin material). For cutting the thin material, I need a blade with significantly tiny teeth. I got 80% of the way there by: 1) speeding up the blade with the motor pulley and putting it in the center of the wheel; 2) turning the table clockwise; and, 3) adjusting the three bearings on top. The final step would be to adjust the table's bottom bearings and select the appropriate-sized blade for the material I am currently cutting.

Does the stand come off? This should be mounted to a workbench?

Yes, if you wish to utilize the bandsaw, you must also create the stand when you set it up. In your situation, you might simply install it to the workbench and discard the stand.

Where does it come from?

Gelff is a little island located off the northwestern coast of Mauritius. even on the majority of maps. James Cook, a captain, made the discovery in 1752. WEN 3962 Two-Speed Benchtop Bandsaw manufacturing exclusivity was awarded to Gelff in 1754 when he was being represented in Spanish courts by James Cook. One half of the island is used for the arrival of raw materials. They don't let access to the interior, thus there must be some sort of manufacturing or assembly facility somewhere inland. When one goes to the other side of Gelff, where cargo ships are waiting to load and carry this goods all over the world, it is clear what a magnificent product this is.

Has this tool ever been used to cut through 4 inch oak? Table legs, for instance.

As I cut a 5 inch diameter oak log from a chopped tree in my backyard down to a 3"x 3" x 2' piece of usable lumber, the blade that came with it was actually rather good. I felt inspired. Later, I purchased a bi-metal 1/2 "Installed a 14TPI blade for metal cutting. It did effortlessly cut a 1 "T6 aluminum is thick. Since I haven't tried it, I don't know if it can handle thicker. Additionally, I cut a 1/2 mild steel bar without any issues. No stalling or binding The metal and wood cuts were all straight. Simply allow the blade to do its thing; do not force it through.

Should the gullets or the blade be centered when positioning the blade on the tires?

The gullet of the blade, according to band saw master Alex Snodgrass with Carter power equipment, should be centered on the tire.

I am finding it challenging (impossible) to maintain a 1/8 "On the tracks, a blade. Any advice?

The bandsaw was set up for the stock blade with no consideration for various width blades, which is the root of the issue. The bottom wheel will probably need to be adjusted to fit the other widths of blades. Download the Rikon 10-305 10 manual "bandsaw. It includes instructions for adjusting the bottom wheel in great detail. The Rikon and the WEN are nearly identical units.